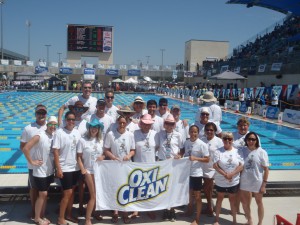 Oh, where to begin?  St. Pete Masters tackled Texas with a vengeance, swam fast AND had a great time, despite our small disappointment in not bringing home a top ten banner.  Yes, we were eleventh, but not for lack of trying.  The SPM women carried the weight of the combined team scores with a total of 251 points for a sixth place finish out of 134.  The men were 17th with 142 points out of 138 teams and overall we scored a total of 407 points for that 11th place finish out of over 190 teams! Many of us traveled together on the same flight out to San Antonio, so the adventures began at Tampa Airport with Jodi Schwartz purchasing the “A” boarding on Southwest Airlines so she could snag seats for the group.  Pretty sure not too many people wanted to sit by us anyway as we were a little boisterous.    Once we got our rental cars we were on our way.  Little did we realize that we were taking our life in our hands as we drove on those Texas interstates!  Everyone in Texas drives a giant pickup truck at light speed and these partially lost tourists were definitely out of our league.  Paula Texel and Cheryl Kupan just kept saying over and over “I don’t want to own this car!” and the goal for the weekend was to not become the 783rd death mentioned on all of their over-the-highway traffic information signs!  Trust me, it was an actual fear. 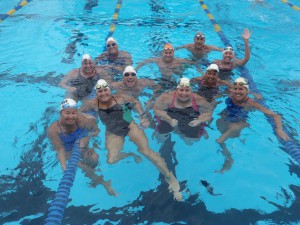 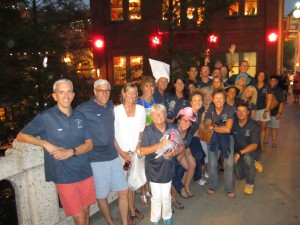 Leading the men’s side was Ted Bradley with three first place finishes in the 1000 Free, 200 Back and 400 IM.  He placed 2nd in the 500 Free and 3rd in the 200 Free.  Kern Davis scored some big points for the gentlemen as well as he placed top ten in all six events (500 Free-6th, 1650 Free – 2nd, 200 Fly – 4th, 200 IM – 10th, 200 Breast – 3rd, 400 IM – 3rd).  Kern chooses his events carefully knowing you have to swim the long events to be successful, but sometimes you just need to show up – like for the relays.  Kern is busy chatting with teammates on the turn side of the pool when he realizes that his mixed medley relay is not only on the blocks, but actually in the water.  He runs around the pool, grabs his cap and goggles from our bench on the way, and literally leaps onto the starting block as Linda Visser is finishing the backstroke leg so he can swim the breastroke leg.  It looked almost seamless except for the panicked look on his face!  And then we have Bob Beach, the founder of our team and our oldest team member swimming at the top of the 80-84 age group.  We can talk about his 1st in the 1000 Free, his third in the 1650 or the 4th and 5th place finishes in the 200 and 500 Frees respectively, but what we really want to discuss is how does Bob sleep in his car in the Wal-Mart parking lot every night of the meet and still swim so fast?!?!?  Also scoring points for the men were Eric “Hook ‘Em Horns” Herman gutting out the 200 Fly for a 5th place and David LeClair, a temporary transfer from GOLD/Boca Raton, with a 5th place in the 1000 Free. The rest of the boys team did a great job and many had personal best times, but more importantly, we had Sully AKA OxiClean Guy!  If Matt Grevers were not 6’8” and an Olympian, Sully would have been the star of the meet.  Once the announcer figured out who Sully was, every swim of his was mentioned and people were hunting him down.  It did not hurt that Sully had provided us with a lot of our team gear and we sported the OxiClean caps on our mixed relays on Saturday.    SPM obnoxious, I think not….. Truly though, the star, and best teammate, of SPM was John Doolittle.  As he was getting ready to dive off the block for his second event of the meet, he pulled up on the block handles and tore his biceps tendon.  He did manage to swim his event, but headed immediately to first aid after.  Once Dr. Dan Newhaller took a look at it and pronounced it almost definitely torn it was off for an MRI.  Dan’s wife, Ashley, was a trooper and packed him up and took him to the nearby army base to be looked at.  John was unable to finish the meet, but in his bright yellow cowboy hat that made him look exactly like Woody from Toy Story, he cheered for every single event for the rest of the meet.  Charlotte even said “that damn yellow hat, I can see it every time I breathe”! Love it or hate it, there he was being the best teammate ever.  Speaking of Ashley…we have decided that emails regarding anything to do with SPM will go to her from now on because Dan reads nothing that I send out and he barely knew what was going on the entire trip.  Swimming in very tough age groups were Steve Freeman, John Nixon and Phil Harasz and while not scoring points, all three had some excellent swims in San Antonio.  Of course, Steve just really cared about beating Livia’s time in the 200 Fly and was pleased to not have to pay off on the bet (I think it was Sunday post-workout breakfast for a year!).  It was close though, as Steve took a couple of “small rest breaks” during the event.  John Nixon wowed us with his backstroke times and is definitely looking forward to aging up as he would have placed in his soon-to-be age group.  Phil did entertain all of us with his swims – first by running out of room to surface on his 50 breastroke and earning the name “submarine” and then by having a rather fast seed time in the 100 Free, but staying with Steve for the first 50 as was the goal. 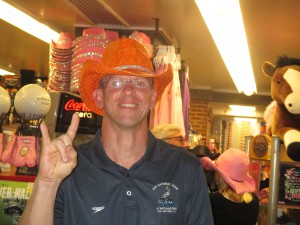 Long after the sun set on the Lone Star state meet and we have returned home, I cannot help but reflect on what a wonderful experience this was for all that attended.  Friendships were forged and swimming bonds strengthened that many of did not even realize existed.  With that in mind, so many thanks to Cheryl for the many hours of planning and organizing and also for helping Jodi and Melissa with our awesome tie-dye shirts.  Many thanks to Dawn for collecting the medals for everyone during the meet and to Livia for the hundreds of pictures that she took (and burned onto CD’s for everyone).  We all feel so lucky to have been part of a team that had the best team gear (we had yoga pants!) of any team at the meet and that is thanks to Sully (OxiClean) and Lauren (Speedo).   To Charlotte, Stase and Dan for sharing your rental cars with the rest of the team and driving in crazy San Antonio, I am grateful. I sincerely hope that this motivates a few more of our team members to take the plunge, and join us on what we hope will be an annual adventure to USMS Spring Nationals.  Next up – Greensboro, North Carolina, April 28 – May 1, 2016!